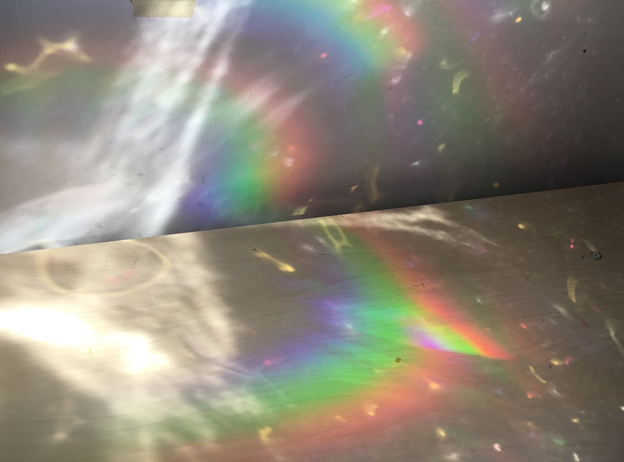 Light is fascinating to young children.  It provokes a sense of wonder and ignites curiosity and imagination.  The Firefly class is engaged in an ongoing investigation of the physical and aesthetic qualities of light including transparency, reflection, color and shadow.  We have also explored light’s counterpart: darkness.

Light and darkness are imbued with cultural and religious significance.  “Let there be light,” were the first words spoken by God.  The Firefly class has considered the meaning of light in the context of Jewish tradition and holidays.  We have also wondered, “Why did God create light?” and “Is God with us in the dark?”

Areas of the classroom serve as a ‘light laboratory’ where the children experiment with light phenomena.  The children constructed a ‘disco box’ which hangs in the window and they photographed the interaction between the sunlight and the disco box’s surface.  The children’s interest in rainbows led to an investigation of color mixing, and the Fireflies have represented rainbows in a variety of media.  We also noticed that the children respond to light with physical movement: joy and dance in the presence of reflected light from the disco box; hiding and running in the dark; and a developing relationship with their dancing, moving shadows.  Our work has led us to be more aware of our relationship to the sun’s light; the children often comment when the light changes, whether those changes occur from passing time or a passing cloud.